WBRC is 120 years young this year. As we travel in our communities in Maine, Florida, and beyond, it’s an honor to see examples of our firm’s design work – some going back over 100 years. Like many legacy A/E design firms, WBRC went through many name changes as partners joined or departed. Here is a brief history of WBRC’s name changes and branch openings. 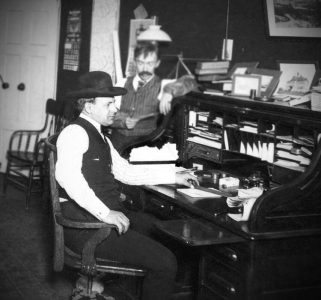 Two former engineering classmates from University of Maine class of 1898 gain some experience and AIA certification in Boston, then move to Bangor to start their own design firm.

During their first year in business, these two 26-year-old architects designed three schools, three churches, seven homes, a hotel, a store, and two apartment buildings, among other projects. John F. Thomas returned to Boston in 1905; C. Parker Crowell went on to lead the firm for the next 54 years, retiring at age 80. 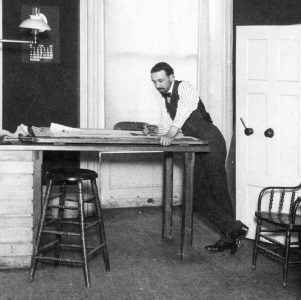 After John F. Thomas departs, Crowell renames his business and hires Walter Lancaster. When the Great Fire of 1911 took out most of downtown Bangor, the two of them designed many of its new buildings, including the Kirstein Block, where WBRC’s headquarters is today. 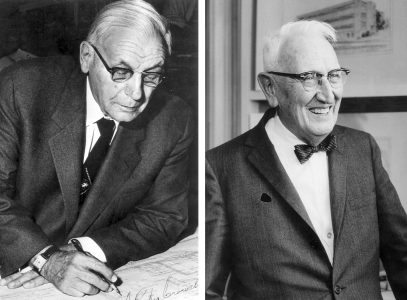 Walter Lancaster becomes a partner and spends the next 37 years working with C. Parker Crowell on hundreds of buildings, including 44 buildings on the University of Maine campus in Orono. Lancaster, like Crowell, will work at the firm until age 80. 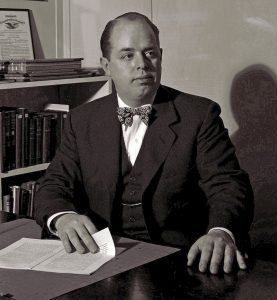 Ambrose Higgins, son of architect E. Leander Higgins, visits his father’s friends Crowell and Lancaster, and is invited to join the firm. In addition to being Maine’s third licensed architect, he is elected to the American Institute of Interior Designers. Gertrud Ebbeson, one of the first women to earn a degree in architecture from MIT, joins the firm the same year. 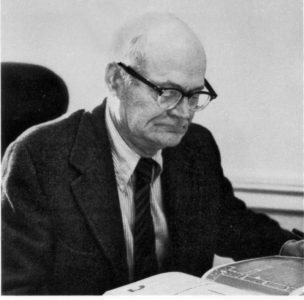 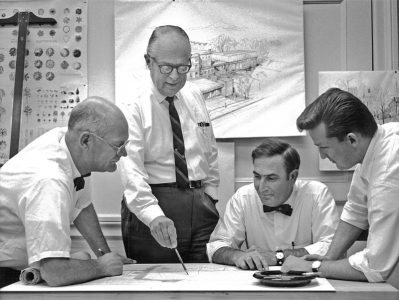 George Lloyd joins the firm for two short but productive years, designing a college dorm, a Catholic church, and a local YMCA during his tenure. 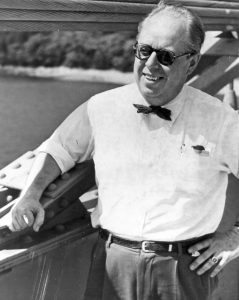 After George Lloyd leaves the company, Higgins and Webster know they need to plan their succession. Ambrose Higgin’s death in 1971 makes it even more urgent. Fortunately, three talented architects were ready to assume leadership roles. 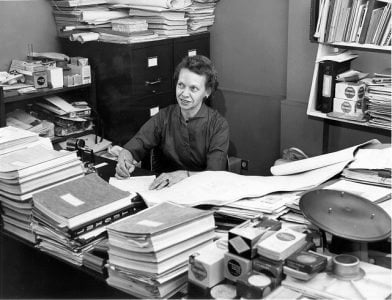 As the new sole owner, Ed Webster approaches three architects on his team, Gertrud Ebbeson, Herb “Skip” Day, and newcomer Alan Baldwin, with an offer of ownership. All three accept, and “associates” became partners. Gertrud is one of the first female A/E firm principals in the state of Maine. That same year, Webster proves his mettle by becoming a licensed architect as well as an engineer. 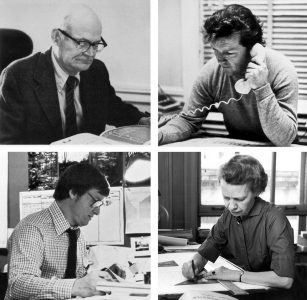 Wishing to give all its owners recognition, the firm name is changed to Webster / Ebbeson / Baldwin / Day in 1974. 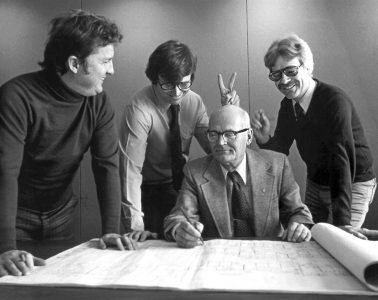 After Gertrud Ebbeson retires, a civil engineer named John Rohman is offered an ownership position. Rohman would go on to serve the firm 38 more years, 20 of them as its CEO. Like many of his predecessors, John Rohman stays highly involved in community service. He also keeps another firm tradition, gaining a second professional expertise. His is Interior Design. 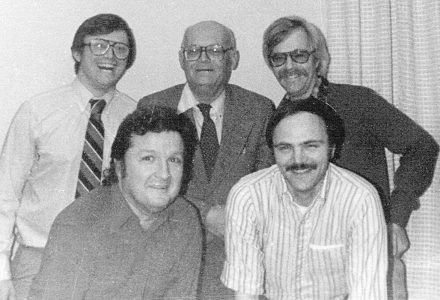 The firm’s longest name also ends with the toughest name to pronounce: Czarniecki. (Pronounced CHAR-neh-key), after architect Mike Czarniecki, who had become a partner in 1981. Though Ed Webster had retired in 1987, his name had too much brand cache to remove from the firm’s moniker. 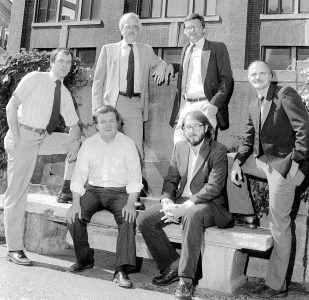 For its 10th name change, the owners of Webster, Baldwin, Rohman and Czarniecki (with Al Bromley and Steve Rich now principals) decided to shorten the firm’s name to just initials: WBRC Architects Engineers.

It’s probably for the best. If we had kept up the last name tradition, the firm’s name today would be Whitney / Frank / Bolduc / Brody / Borrelli / Pogar / Adcock / Kowal / Johanning / Monroe / Ward / Laplant / Boothe! 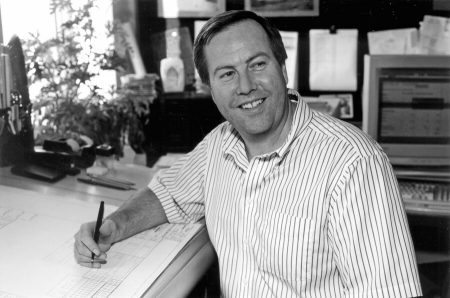 Principal Doug Whitney expresses interest moving to a warmer climate. Rather than lose this gifted and prolific architect, his partners ask him to found a WBRC branch in the Florida location of his choice. He chose greater Sarasota, a beautiful and economically vital area on the state’s Gulf Coast. Doug and his team set up shop in Lakewood Ranch, one of the country’s most popular and fastest growing master planned communities. 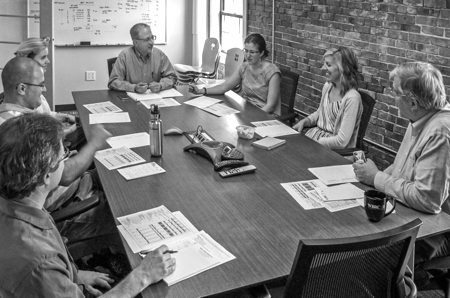 With much of Maine’s economic development happening in the southern part of the state, a branch office in Portland seemed a prudent step. WBRC’s Portland location soon proves essential when the firm landed one of largest jobs in its history, the renovation and expansion what is now Cross Insurance Arena. WBRC’s Portland branch allows the firm to efficiently provide solutions to clients in neighboring states, as well as continuing to serve the great state of Maine. 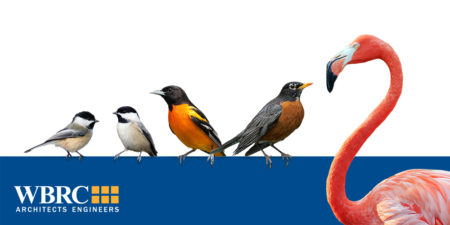 WBRC opened branch offices in Maryland and Michigan to better serve clients with facilities nationwide, including the VA and USPS. We also joined much of the world in perfecting the art of working remotely during the COVID pandemic. 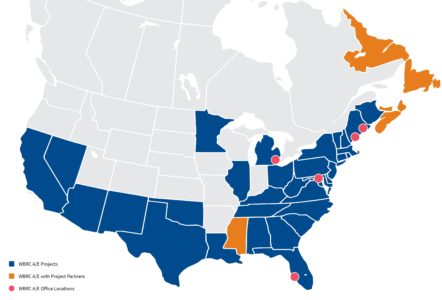 In early 2022, WBRC went through a rebrand. WBRC Architects Engineers officially became WBRC Inc. This change reflects the diversity of our disciplines, which also include interior design and landscape architecture. The name WBRC is also shorter and, with our distinctive new logo, easier to read. The brand refresh came at a very important time in the firm’s history. Happy 120th Anniversary, WBRC!